Protection of the land constituting Confederate General A.P. Hill’s right flank in the 1862 Battle of Shepherdstown advanced July 31 with the placement of a conservation easement on 24 acres of Potomac River Bluff bluff where Hill’s forces dislodged Union troops who had pursued General Lee’s army after the Battle of Antietam.

While Hill’s right flank did not see the dramatic action of his left flank, where miscommunication and other problems resulted in decimation of the 118thPennsylvania Regiment, it played an important supporting role.

The Jefferson County Historic Landmarks Commission acquired the 24 acres on Hill’s right flank with the assistance of the American Battlefield Trust and the National Park Service’s American Battlefield Protection Program, which required placement of a conservation easement to permanently protect the property. That document was signed July 31, with the Land Trust of the Eastern Panhandle as the easement holder, responsible for its monitoring and enforcement.

The easement area of four parcels, known as the Eyler-Merham tract for two previous owners, includes a neck running down to River Road, with the majority of the property on the crest of the bluff. A house on one of the Eyler parcels has been demolished, leaving the entire, partially wooded 24 acres without structures, which is how it must remain under the terms of the conservation easement. In addition to its historic value, the easement will also help prevent runoff and protect the quality of water in the Potomac.

Historians argue that the Battle of Shepherdstown convinced Union General McClellan not to pursue Lee’s forces further into what was then Virginia in 1862 and, conversely, led Lee to abandon plans for a second invasion of Maryland that year.

A conservation easement already protects 19 acres of Historic Landmarks Commission land upstream, at the intersection of Trough and River Roads, where both armies had crossed the Potomac at Packhorse Ford and where the heaviest fighting occurred. In addition, the Land Trust of the Eastern Panhandle and the Jefferson County Farmland Protection Board hold easements on 57 acres of privately owned land further up Trough Road, protecting it from development.

The Historic Landmarks Commission, Farmland Protection Board and Land Trust of the Eastern Panhandle continue to look for opportunities to protect additional land in the Shepherdstown Battlefield area. 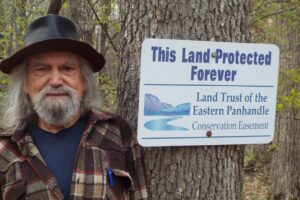 My True Home by Susan Whalton, LTEP “The Mark Eddy[...]

The Margaret and Charles Biggs Story by Susan Whalton, LTEP...

The Bishop Story by Susan Whalton, LTEP “The joy of our...